We have called it the best Amazfit ever and it is actually so because Amazfit Bip 3 Pro puts together a package, design-price-aesthetics, which makes it the top of the models presented so far. 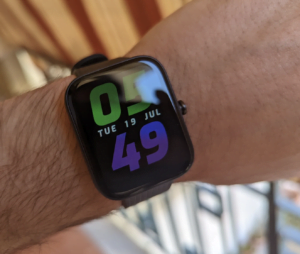 Amazfit Bip 3 Pro is the top one

Even if, alas, with a unjustifiable lack. I had and used with pleasure all the previous models, even if I have been using Amazfit GTR 3 Pro for a few months, now irreplaceable for me, and it was therefore a pleasure to also try the latest model, curious about the many innovations that it brings with it compared to its predecessors. But as I said there is also one thing that, as a serial user of Amazfit Bip, I did not like at all and that I consider a big step back because those who want and buy an Amazfit Bip do it mainly for that feature, which very few others offer. Right now.

There is very little to say about the aesthetic side because it is the classic Amazfit Bip, with its now iconic design, although here it is slightly revised so that there is more harmony thanks to softer and more homogeneous curves. It is made of plastic and the display is covered with a resistant glass, while the strap is made of the usual silicone that does not allow the skin to breathe, generates sweat and wears out in a few days; here it is a little improved compared to the past ones, but it is not yet of quality. Then it is resistant, well built, light and compact, it is a real tech gadget not bad.

The usual Amazfit with a little more

Here, too, the discussion follows a bit the one seen with the aesthetic aspect because Amazfit Bip 3 Pro does not distort anything compared to the past but rather retains the characteristics and quality of previous models by adding some new functions, thanks also to new sensors.

It is the classic Amazfit Bip, especially when compared to its predecessor, with the same functions and the same excellent accuracy of the recorded data, plus some functions that are now popular among smartwatches in recent years.

Amazfit Bip 3 Pro therefore brings with it, in addition to the usual things, the possibility of acting as a shutter button for the smartphone camera to which it is combined, stress recording, menstrual cycle recording, respiratory training, measurement the amount of oxygen in the blood and the recording of the REM phase during sleep.

In addition to these new things, it clearly allows you to monitor your sleep, to record the steps traveled, the calories burned and the distance traveled, to read the notifications, to view the weather forecast, to record the routes and the data of the workouts, also taking advantage of GPS and GLONASS and over 60 programs, to use the PAI function and to do all the usual things seen with previous models and which we now find in all the most recent smartwatches.

So, beyond the number of functions and what it allows or does not allow to do, what surprised me about Amazfit Bip 3 Pro are the precision and reliability with which it works and records data: I am a sports patient and I train continuously and hard and I care enough about the data and I can say with certainty that it is very accurate in measuring the data, whether it is heartbeat, blood oxygenation, sleep, steps or distance, even by comparing it with other competing devices.

The data that it records and then shows, through the Zepp application and its small display, are true and allow you to have a concrete, reliable and complete picture of daily activities.

The fundamental point for this to be possible, of course, as with all devices of this kind, is that it is tightly tightened to the wrist at a distance of a couple of centimeters from the hand, otherwise it could happen that the measurements are less accurate or fail altogether.

(I’m talking, for example, about stress, oxygenation of the blood and heartbeats). And I think this is a fundamental aspect because a smartwatch must first of all be credible and it is, in every area. It should be emphasized that it allows you to control music playback on your smartphone (it is not possible to store songs in its memory), to customize the bands and with the dial with many themes and that it enjoys the excellent software of the many recent Amazfit smartwatches, which is beautiful to see, simple to use, responsive and feature-rich.

now we come to the sore point, to what at the beginning I defined an unjustifiable lack: the display, for heaven’s sake, is a huge step forward compared to that of the previous models in terms of brightness, color saturation and by definition (240 x 280 pixels in 1.69 inches), but it is not transflective; yes, to my bitter surprise, I had to accept the fact that the Amazfit Bip 3 Pro display is of the IPS type and not transflective, with all that this entails, starting with the absence of a continuous display of the watchface. In fact, after a customizable timeout, the display turns off and to turn it back on it is necessary to press the side button or rotate the wrist, so it is not always on as in previous models.

This, beyond personal preferences and the advantages of the two technologies, is, at least for me, a huge step back because, and always in my opinion, whoever sees, and then maybe buys, an Amazfit Bip does it mainly for his , orma ex, a unique feature of the display always on and ready to use, which gives a significant plus in the display of time, date and other parameters of the watchface set. Instead Amazfit Bip 3 Pro mounts an IPS display that yes, as I said, is of a much higher visual quality than any other transflective type but does not offer that unique feature that distinguished and made the Amazfit Bip unique. And for me this was a fundamental aspect that made me prefer an Amazfit Bip to the band 7 (and, I would add, that there is no always-on-display, which in any case would have meant a lot of regards to autonomy).