Now it’s official, the Apple Far out event for the presentation of the iPhone 14 (and more) will held on 7 September. 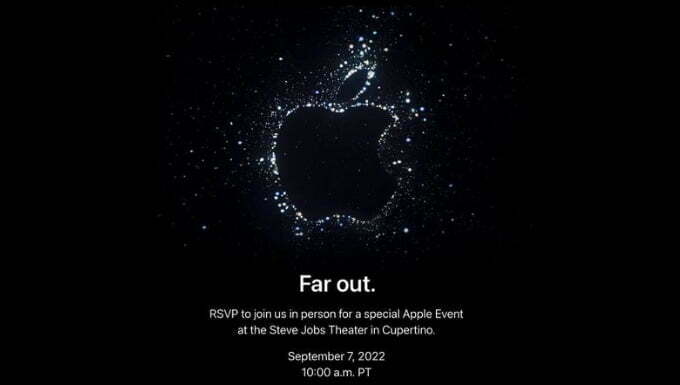 The official hashflag dedicated to the event is active on Twitter. Twitter’s so-called “hashflag” is a custom icon that now appears next to the hashtag #AppleEvent.

What is Apple Far out?

The hashflag for the upcoming Far out shows a dark blue Apple logo with multicolored stars, which is in line with the graphics of the event.

The two Pro models should say goodbye to the notch, replaced by two holes. One of which in the shape of a pill that will house the camera and Face ID system. For the standard models, there should be no novelty in terms of design. Also on the Pro models there will be the A16 chip, while the standard models will continue to use the current generation A15 processor.

In addition to the iPhone 14, the Apple Watch Series 8 should also presented during the event. With updated low-power mode, longer battery life, body temperature detection, S8 chip (identical to the previous one) and other features such as detection of road accidents.

A high-end Apple Watch Pro could also arrive, with a new design. Larger dimensions and a much more resistant display and structure, suitable for extreme sports.

The Far out event could also show us the second generation AirPods Pro. As for the design, Apple should drop or minimize the stem compared to current models. On the other hand, there should be no news regarding the colors, since even the AirPods Pro 2 will only be available in white.

Additionally, the charging case design will likely focus on a clamshell shape to take advantage of the earbuds’ more compact design.

According to analyst Ming-Chi Kuo, the processor of the AirPods Pro 2 will also be significantly more powerful.

The alleged H2 will allow for improved smart features such as automatic switching and Siri controls on the device. Additionally, battery life should improve dramatically thanks to a more efficient management system.

And for the last Apple Far out

Lossless audio playback will be one of the most important innovations when it comes to playing music. On the health issue, there may be news related to the use of AirPods as basic hearing aids. In addition to the possibility of measuring heart rate and posture.

The charging case could also integrate a tracking function similar to AirTag. An external speaker ( to allow them to be found) and faster reload speeds. Shop all new accessories for the new iPhone, watch and iPad.

Apple Far out will stream the event live on its website, YouTube and Apple TV via the ‌Apple TV‌ app. The keynote will begin on 7 September at 7 pm and, in addition to showing the pre-recorded video. It will also in presence with some journalists already invited to the Steve Jobs Theater to touch the new products.